Wong Fleming is pleased to announce that Daniel C. Fleming, V.P. and Partner, has been elected a Fellow of the American Bar Foundation (ABF) in recognition of his outstanding dedication to the highest principles of the legal profession and to the welfare of the community.

Mr. Fleming was nominated by his peers and elected by the ABF Board of Directors. Membership in the Fellows is a special honor as it is limited to just one percent (1%) of lawyers licensed to practice in each jurisdiction. Founded in 1952 by the American Bar Association, the Fellows of the ABF is a global honorary society of attorneys, judges, law faculty, and legal scholars supporting the research program of the ABF.

Mr. Fleming has achieved professional excellence in the legal community and has dedicated his career to help the advancement of women and minority attorneys. Under his leadership, Wong Fleming has grown from a law firm of three attorneys to one of the largest women and minority owned law firms in the country with cross border practices, establishing Wong Fleming as a global law firm. He has mentored and promoted excellence in the legal work at Wong Fleming and supported other diverse firms around the country on behalf of Fortune 500 clients. Mr. Fleming, an AV-Preeminent rated attorney by Martindale Hubbell with over 38 years of legal experience, is also one of New Jersey’s best-known authorities on bankruptcy and commercial litigation.

About the ABF Fellows

The ABF Fellows serve as stewards of the American Bar Foundation, an independent, nonprofit research organization which conducts short- and long-term socio-legal research projects. The ABF’s mission is to serve the legal profession, the public, and the academy through empirical research, publications, and programs that advance justice and the understanding of law. The ABF’s research falls under one of three categories: learning and practicing law; protecting rights and accessing justice; and making and implementing law. The Foundation is committed to broad dissemination of research findings to the organized bar, scholars, and the general public.

Mr. Fleming is the V.P. and Partner in the firm’s Princeton, N.J. office and a litigator who has taken over 100 cases to jury verdict. He is Chair of the Banking, Finance and Bankruptcy Practice Group, the Products Liability and Mass Tort Litigation Practice Group, and the Intellectual Property Practice Group. His jury trial, bench trial, and arbitration experience are wide-ranging and include products liability, commercial disputes, employment litigation, civil rights, bankruptcy, and even international parental child abduction. Mr. Fleming received his undergraduate degree from Villanova University in 1981, where he earned a Bachelor of Arts degree in Modern Languages. He received his law degree in 1984 from Catholic University of America in Washington, D.C. and earned the American Jurisprudence Award in Constitutional Law. Upon graduation from law school, he served as Law Clerk to the Honorable Joseph M. Hannon of the Superior Court of the District of Columbia.

Mr. Fleming is a member of the New Jersey, New York, Pennsylvania, Maryland, Ohio, California and Washington, D.C. Bars and has been recognized as a Super Lawyer for his outstanding achievements as a lawyer. He is the co-author of an article appearing in the bankruptcy bar’s most notable journal, the American Bankruptcy Institute Law Review. He has also donated his time to the community by speaking to Philadelphia citizens about bankruptcy at the Philadelphia Bar Association’s People’s Law School forum. 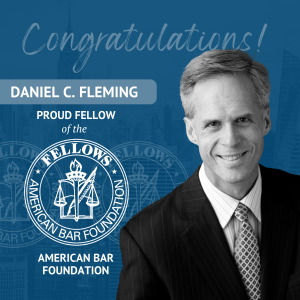